There are a lot of tools out there for bug tracking, but Jira is one of the most popular. It is a cloud-based SaaS application that has been around since 2005 and is being used by over 25,000 companies in 100 different countries.  Many companies today use Jira for project management. The problem is that you get inundated with emails about open issues. You can’t get to them all, so your inbox becomes unmanageable. But there’s a better way! In this article, I will discuss Jira tickets and how it is used.

What is Jira Ticket?

Jira ticket is proprietary issue-tracking software created by Atlassian. It was designed to help teams manage and set priorities for their work. It is a web-based platform that helps you manage your project by providing a simple interface for managing your tasks and the people involved in the project. You can also use this software to create dashboards that show how much work has been completed and what needs to be done next.

It is an online service that was made to help you track and manage your projects and tasks. It may not be as popular as other project management software, but it could be an excellent option for those who are looking for a more straightforward way of managing their projects.

How to Create Tickets in Jira?

Now, I will show you how to create a new ticket in Jira and the fields that we consider the most important in organizing and cataloging your work effort. So, when you click the Create button, you will go to the create issue modal. 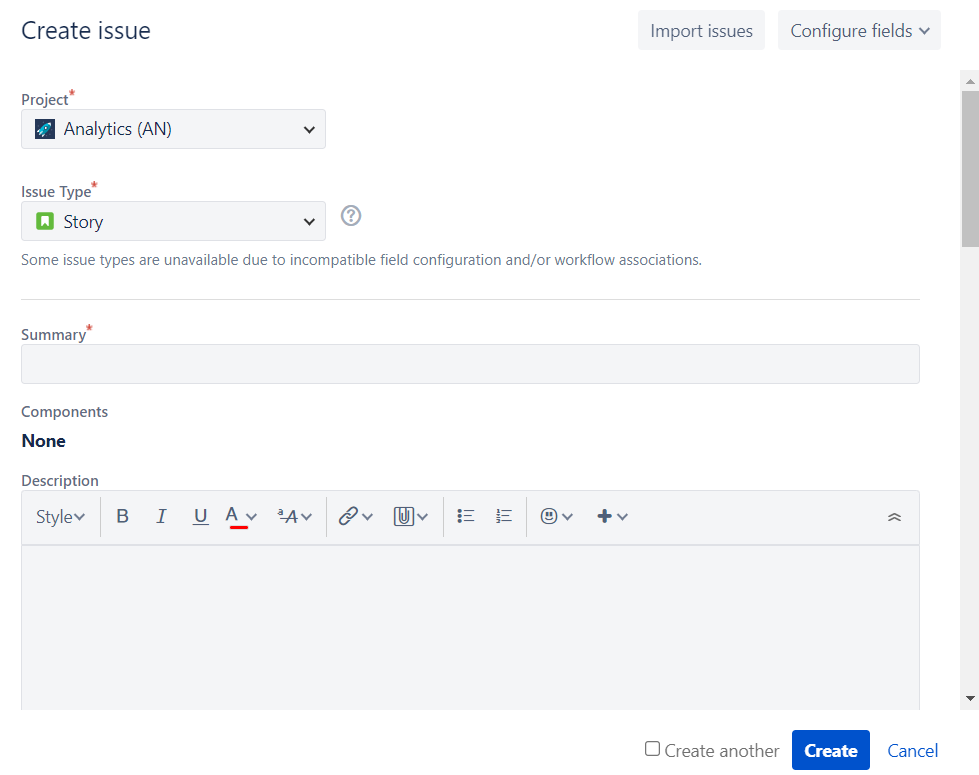 First, you can select your issue type, and the available types are Task, Bug, or Epic.

When you set up the project here, we have epics which are basically chunks of work that are too big to be done in the same ticket. So, epics are functionality that includes frontend and backend work, database changes, basically work that needs to be broken down into chunks, tasks, or units of work that are feasible to do in one branch and one ticket and one person. So, tasks would belong to a particular epic if they had been broken down that way.

If you’re familiar with agile, you know the concept of user stories. You can create tickets of that nature, and we have bugs, so we can select what kind of an issue it is. Let’s say it’s a bug, you want to write a descriptive summary, and you want to describe the issue in an as detailed way as you can. But a picture can be worth a thousand words, so one really good thing is you can attach video files or screenshots to the issue ticket. 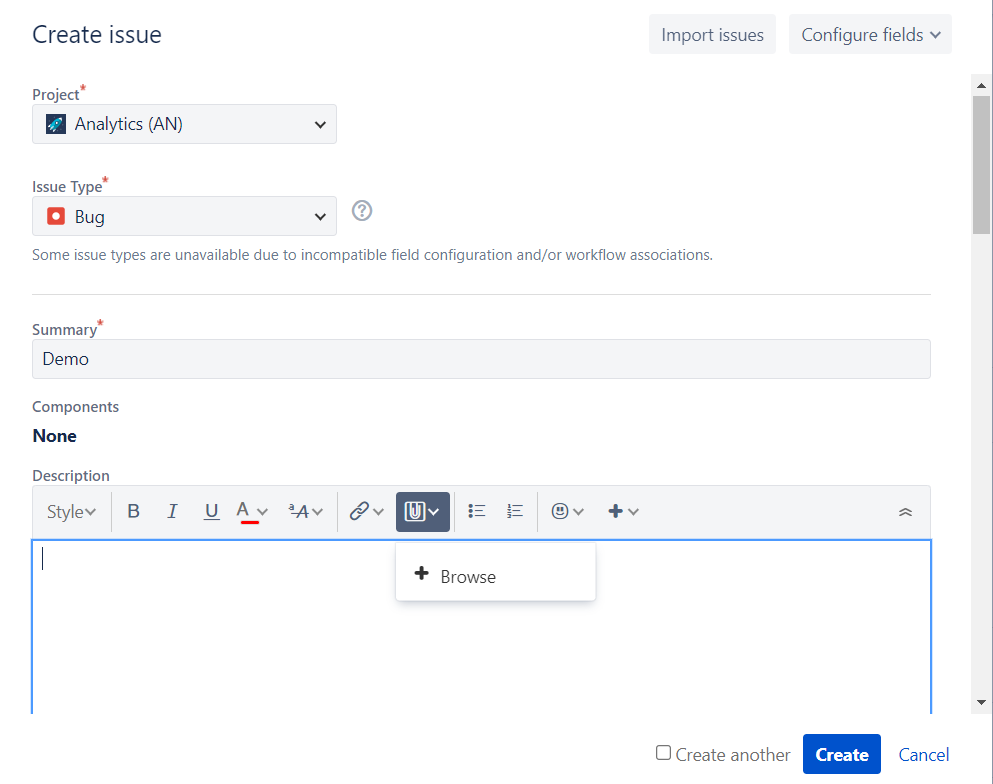 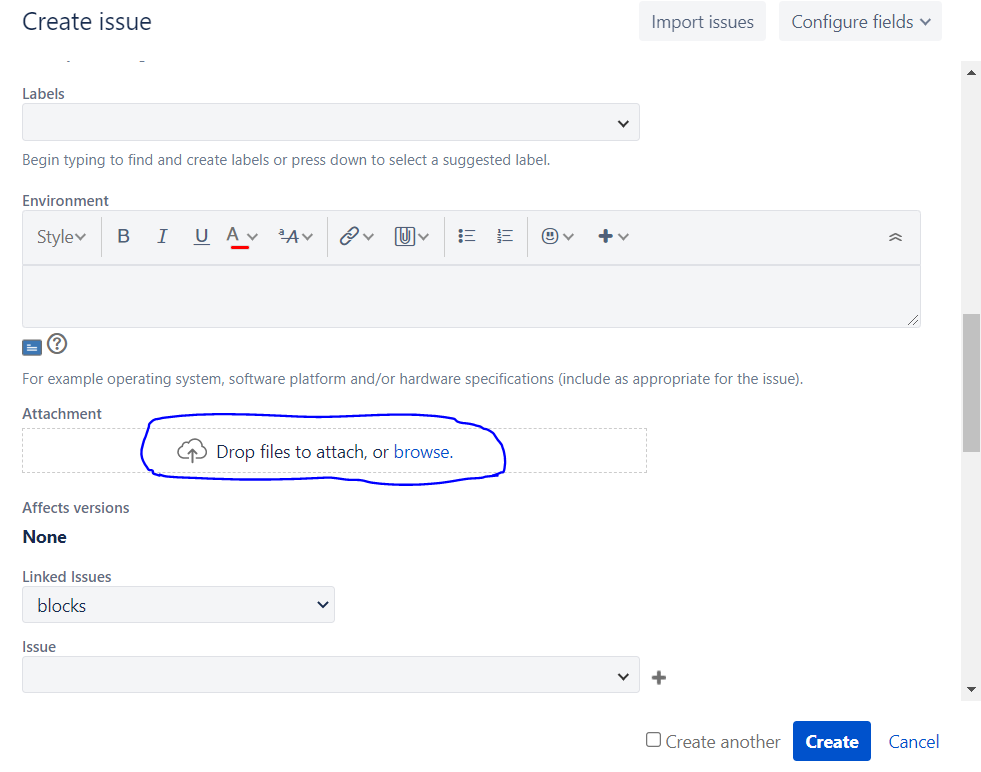 The fixed version is important. When an issue is created, the project manager decides which fixed version to go to. So let’s say it’s a bug that was of enough urgency that we wanted it to go into this next release, we can state that fix version here. When we do release management in Jira, this fix version can be very important because this way, you can map out the progress on a given release. If you know the version that is being affected by a given problem, you can put it here.

You can give Jira’s ticket a priority. Depending on the urgency of the Jira issue, you can give priority to the ticket. For example, a production related bug can be given priority as Highest. This means that the developer will solve this Jira ticket/issue first. 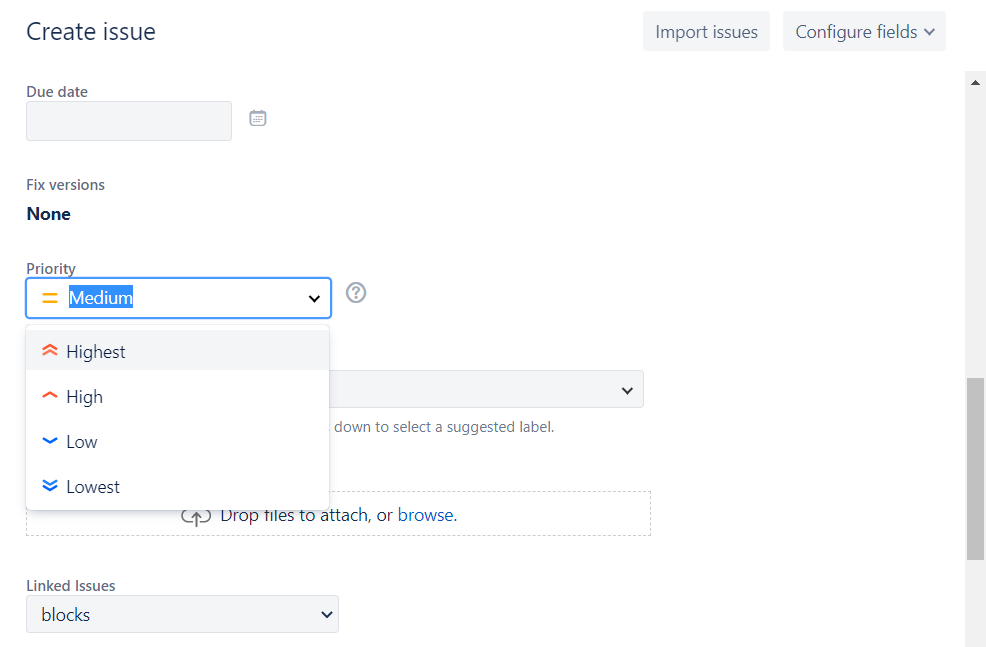 At the same time environment is often overlooked but essential. So, let’s say you have a live production environment, testing environment, as well as the developers. Having their own development environments, it’s really important when somebody finds a bug to say which environment they saw this bug in because there could be a difference in the configuration that’s causing the issue, or there may be different versions deployed on different states of things. So, to know what we are talking about, it is really important to put the environment.

Linked issues are really important, so if you are aware of issues that this ticket is related to, you can put them here. If you have found an issue that may be blocking the completion of other features, let’s say you found a bug in a feature that’s being expanded, and maybe that bug would block the new development on that feature. So you can say “blocks” and you can search for whatever ticket has that relationship with the current Jira ticket. This can really come in handy sometimes, if you have multiple testers or if they have tested a while back and forgotten something. If they submit an issue that has already been documented in another ticket, you can mark this as a duplicate, and that way, you can mark it as done and get it off your plate. So linked issues can be very important in terms of organization. 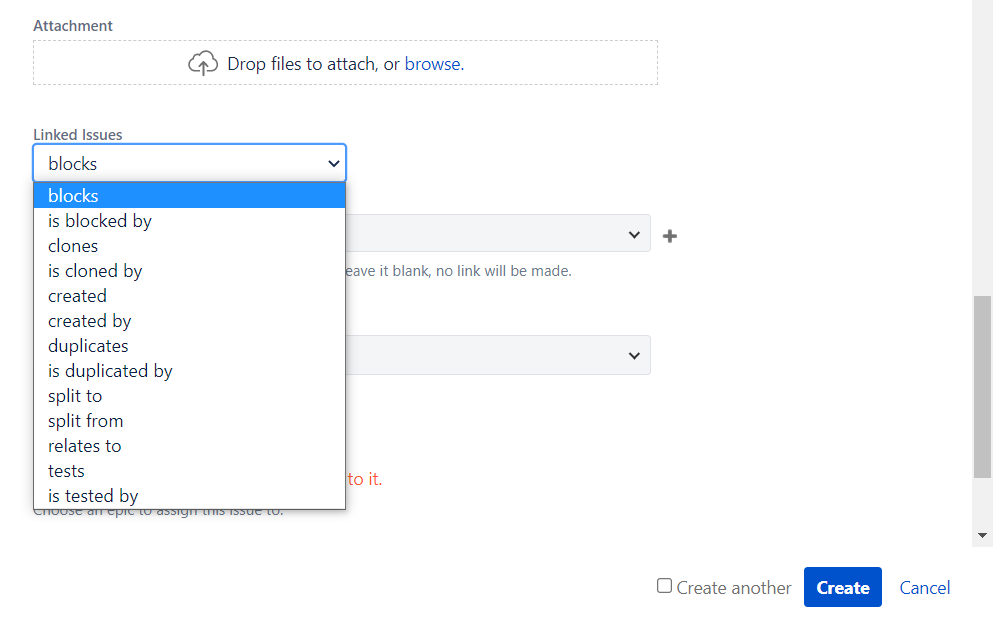 You could pick the assignee for the Jira ticket. So a lot of times, if you are a tester, you don’t really know which developer would be best for a given task, and delegation should probably be done by the project manager anyway. So, by default, what Jira will do is it will assign all new issues without an assignee to the owner of the project, which is usually the project manager. But if you happen to know who should be given a certain task, you can select a person to assign. Or, if you have a group of developers and any of them can work on the Jira tickets, the assignee can be set as Automatic. Jira will automatically assign the tickets. 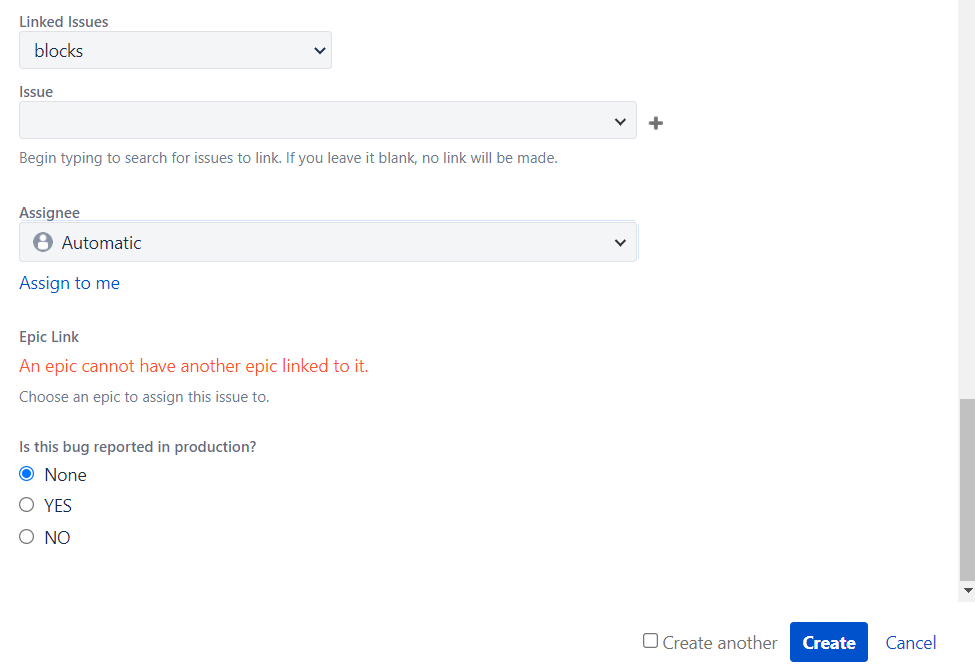 So that was all about Jira tickets. There are plenty of options in Jira which you can leverage while creating Jira tickets, and they keep on upgrading the product for a better experience. So go ahead and get started with Jira tickets today.

Simon Bonello is founder of Chubby Developer. His main area of focus is Business Process Automation, Software Technical Architecture and DevOps technologies.
More about the Author
PrevPreviousJira vs Trello. Which one you should us.
NextServerless vs Microservices. Know the differenceNext